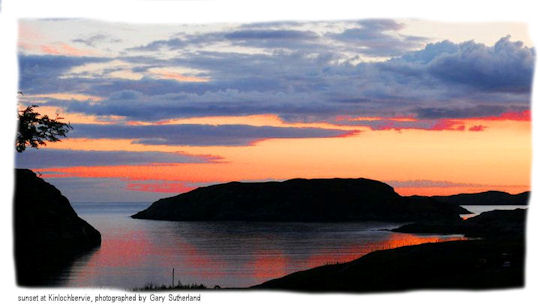 Eddrachillis is on the stunningly beautiful west coast of Sutherland.

Oldshoremore, Scourie, Kinloch, Kylestrome, Polin & Handa Island. These have all been photographed and transcribed and are available for viewing in the Burial Ground Section.

War Memorial of Kinlochbervie and Scourie are included in our War Memorial section
Place names in Eddrachillis
Maps of Eddrachillis - see Google map on right also
Eddrachillis Families - lots of information on the many families being researched by our members
Further recommended reading:
Glendhu House, a really good article which originally appeared in the Northern Times.  Good description of life in an isolated spot.
The Duke of Sutherland's Memoirs contains a full list of all those who made a contribution to the Duke's statue in 1834 - available from our CD shop
Ministers & Men of the North - can be read on the internet

Email ThisBlogThis!Share to TwitterShare to FacebookShare to Pinterest
Labels: a place to start

This page contains links to family details given by descendants mainly members of our mailing lists.  Also included are links to family trees prepared by members.  Many of the items contain a great deal of genealogical information but as always further information is most welcome. In most cases the name of the researcher is shown together with an email address for contact. In the few cases where this is not so please contact me and I will try to pass on your message.

On the following list all Mc and Mac names are shown as Mac. 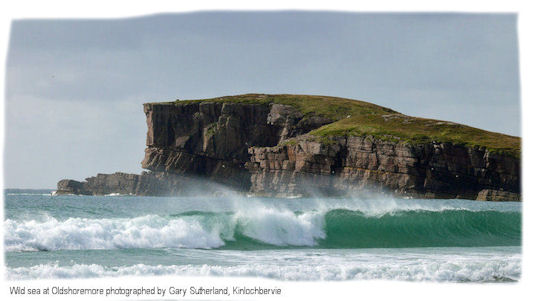 This list of boats in Eddrachillis 1830 has been transcribed from the Sutherland Estate Papers by Marion Johan Fleming in 2011 (NLS Edinburgh Dep 313/ 1054A0.

Marion's transcription includes the keel details of each boat.  You may view or download that list HERE.  Many thanks Marion.
This abbreviated list shows each township and the boats in it.  Some of these men are also shown on the 1830 Small tenants list.


* Callach may be used here as “old man”.
* Precentor is the modern spelling for the person who sang the first line of the psalm in church
* McKachin is son of Hector 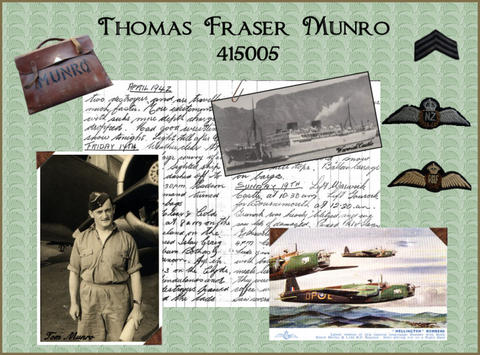 George Munro was born at Oldshoremore, Eddrachillis in 1875. He was a policeman at Leith, Edinburgh after being in the Black Watch Regiment, serving in India and Boer War. While in South Africa George had had his bagpipes silver mounted and they have passed down through the family as an heirloom. George married Angusina Fraser who was born in Achlyness (both George and Angusina went to Achlyness School). Angusina moved to Edinburgh to be near George. Their son Thomas Fraser Munro was born in Edinburgh plus three other children. Eventually George and Angusina decided that the families future lay in New Zealand. George went out there while Angusina took her children home to Achleyness to await word from George that they could sail to their new home. Finally, in 1912, Angusina and her young family left Scotland for New Zealand and her husband.
During the Second World War young Thomas, who had previously been a publican in New Zealand, joined the Forces - claiming to be older than he was - and eventually found himself on leave in Britain when he was able to visit his Fraser relations at Achlyness. It is known that he received a Fraser family history during this trip but sadly this has never been seen. The family guessed that the ship that carried that mail home was torpedoed as so many were. What the family do have is Tom’s war time diary which gives a great description of his short wartime life. 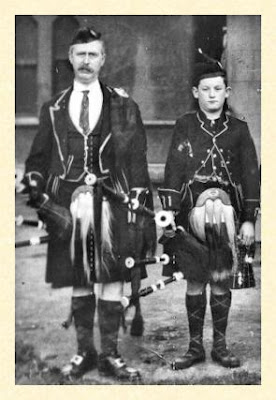 For further information on this family please contact George & Ann.
Posted by Unknown at 22:59 No comments:

Eddrachillis once formed part of the parish of Durness. It was erected into a separate parish in 1724 when Kinlochbervie district was added to ancient Eddrachillis, eadar-da-chaolas, between two Kyles, Kyles Sku and Laxford.

Here, with the help of Hector Macrae, Bonar Bridge, Sutherland, I have put together a list of the place names, old and modern.

Hector has kindly created a map with a numbered list of the main places which you can see below. 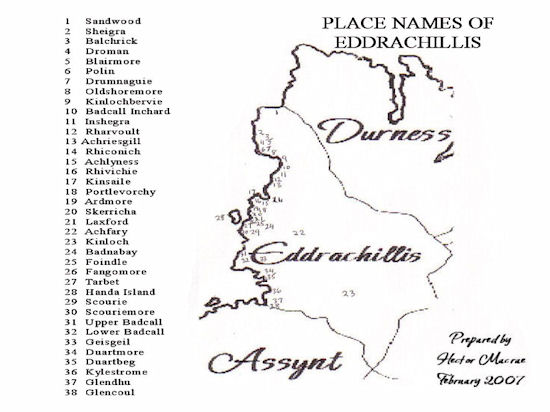 The places shown on the map by number have the corresponding number in brackets after the details on the list below.   There is also a Google map on right hand side.
If anyone can add information to this list especially the last known date people actually lived in these places please contact me and I will be happy to add the information.

ACHFARY – small village in Reay forest between Loch Stack and Loch More (22)
ACHLIGHNESS – Gaelic, wet field – this may be Achlyness
ACHLYNESS – small crofting community south of Rhiconich (15)
ACHRIESGILL – Gaelic, field in ravine, Norse, copse wood – crofting township between Rhiconich and Kinlochbervie (13)
ARDMORE – close to Rhiconich – from Portlevorchy you have to walk the mile to Ardmore as there is no road – on the opposite bank to Fangomore at end of Loch Laxford (19)
ARDCHUILLINN - Near Achfary
AULTANRYNIE (Aultanrunie) – at the east end of Loch More, near Kinloch
AULDRING – 1 tenant there in 1819 (Wm. Munro of Achany) Part of this was added to McIvers Scouriebeg Farm. Between Laxford and Loch Stack
BADCALL (Badcaul) – Gaelic, clump wood – minister Alex. Falconer, there in 1819
BADCALL INCHARD – crofting township between Rhiconich and Kinlochbervie (10)
BADNABAY (24)
BALCHRICK – small crofting settlement north of Oldshoremore (3)
BLAIRMORE – small crofting settlement north of Oldshoremore (5)
DROMAN – near Balchrick (4)
DRUMNAGUIE – next township to Polin (7)
DUARTBEG (Duardbeg) – 1 small tenant there in 1819 (35)
DUARTMORE (Duardmore) – 1 tenant there in 1819 Used to be a village of 6 or 7 houses. Cleared between 1910 and 1820 (34)
FANGOMORE (Fanag-more) – Gaelic, Feannag, lazy bed – settlement at the mouth of Loch Laxford, overlooks Ardmore on the opposite bank (26)
FOINDLE near Fanagmore (25)
GEISGEAL (33)
GLENCOUL – (38)
GLENDHU – (37)
HANDA ISLAND – Norse, sandly isle – nowadays only inhabited by birds but at one time families lived here (28)
INCHARD – an arm of the sea
INSHEGRA – crofting township between Rhiconich and Kinlochbervie (11)
KINLOCH – Reay forest at east end of Loch More, small community and burial ground here (23)
KINLOCHBERVIE – Gaelic, Ceann-loch-buirbhidh, head of Loch Buirve but there are remains of a burg or fort on an arm of Loch Inchard, whence the name (9)
KINSAILE – Former crofting township near the mouth of Loch Inchard. Towards the coast from Rhivichie (17)
KYLESTROME – Norse, kyle stream (36)
KYLESTROME EAST – 1 tenant there in 1819
KYLESTROME WEST – 1 tenant there in 1819
LAXFORD – Norse, salmon loch (21)
LOCH BERVIE – A sea Loch off Loch Inchard. The harbour area at Kinlochbervie
LOCH CLASH – Part of Kinlochbervie. Where the first harbour was situated until the new one was built at Loch Bervie
LOWER BADCALL - (32)
POLIN – One mile north of Oldshoremore (6)
PORTLEVORCHY – on the road to Ardmore (18)
OLDSHORESMORE (Ashare, Oldshoares) there are two Oldshores. The old spelling in Privy Seal record is Aslarmore, Aslarbeg (1551). The Gaelic pronunciation is Ashar – 1 tenant there in 1819 (Dond. Forbes, Ribigill) (8)
OLDSHOREBEG – a small crofting settlement north of Oldshoremore – in the 1861 and 1871 census the area of Polin and Drumnaguie was known as Oldshorebeg
RHICONICH – Gaelic, running stream, mossy – stands at the head of Loch Inchard (14)
RHIVICHIE – near Achlyness, Rhiconich (16)
RHARVOULT (Rhavoult) – between Achriesgill and Badcall Inchard (12)
SANDWOOD – Galeic Seannabhat from Norse sandy lake (1) - a beautiful, isolated beach and loch which is well worth the walk. Park your car at Blairmore - four miles each way
SCOURIE (Scoury) – Norse, Robbers’ Hold or Buccaneers’ Fort – another version has it as Norse, Skaga, a copse and Gaelic, a sheiling – 1 tenant there in 1819 (George Mackay of Bighouse) – today a pretty village (29) - Scourie was once a Clan Mackay stronghold - the village claims to be the only one in the world where, depending on the season of the year, you can see Palm Trees, Red & Black Throated Divers & Highland cattle from the foreshore of the bay
SCOURIEMORE – just south of Scourie (30)
SHEIGRA – the last inhabitation on the west coast of Sutherland, 4 miles south of Sandwood Bay (2)
SINAIRIDH – Gaelic, old sheiling
SKERRICHA (20)
STRATH CHOILLEACH – remote shepherd’s house north of Sandwood Bay
STRATHAN – remote shepherd’s house near the east of Loch Sandwood
TARBET – Gaelic, An Tairbeart, peninsula – small fishing and crofting community – boat here for Handa island (27)
UPPER BADCALL – crofting township overlooking Badcall Bay (31)
Many thanks to Hector Macrae for preparing all the above.

1830 list of small tenants in Eddrachillis
with stock of black cattle, sheep and horses

Transcribed by Marion Johan Fleming, January 2011, from Sutherland Estate Papers (NLS Edinburgh Dep 313/1054A).
Below is a simple summary of the transcription with alphabetical surnames for ease of searching (Mc and Mac shown as Mac). Surname, Christian name, township, and numbers that represent black cattle, sheep and horses in that order. i.e. Angus Abrach at Oldshoremore had 8 black cattle, 12 sheep and 3 horses.

Notes:
Callach means old man or senior
Splitter is a job description for removing the backbone of the fish
Presentor/Precentor is the man who sings the first line of the psalm to lead off the congregation
Buie is yellow or sallow
Bain is fair or white
Don or Donn is brown
Mckeachin is the son of Hector